Radio Imaging IS the reason I started doing voiceover. I absolutely love it. Especially Hip Hop and Urban AC Radio Imaging. I admired the big voice guys I would hear on Atlanta radio who would break out of character and say funny and outrageous stuff. As a recent college graduate at the time, I knew I could do what they did. I had the big voice. I had the humor. I could tell great stories. Years later, I’m a  talent, accumulating more and more stations. 2019 was a very successful year for me in Imaging with the help of being signed to the Mix Group. But I’m always humbled by new stations regardless of where they are in the world or how large or small they are.

So my agent hit me up and said okay Dane we got this new radio station for you I’m always excited about a new station I love radio imaging so this is a really great opportunity for me once all the paperwork was signed they take care of all that stuff on the back end I immediately got in contact with the program director I wanted to know a couple of things I wanted to know.

What their old sound was like? I wanted to know the format of the station. I wanted to know what the morning show and evening drive was like, because all of those things are gonna play into the way that I image the station. I am the official voice and I’m the branding voice for that station and so it was very important that I get what they want right and so I asked a bunch of questions. I asked what they liked most about my demo and what the program director told me was that he really liked the energy that I put in. I had smile, things like that, right.

Some of it just all depends. I’m not gonna give the same kind of energy to “here’s a slow jam” and to “here’s the quiet storm” as I’m gonna give to “the Saturday night party” you know saying so you just have to be very thoughtful about those kinds of things when you are setting up or a station additionally I listen to the station because that’s also very important again it’s all about a vibe about capturing that vibe and recreating it and sending it back to the station because for a year two years three years and hopefully many more years to come I’ll be the voice of this station so I just wanted to give a quick video about radio imaging and I’m Dane Reid the voice-over guy. Subscribe to my blog subscribe to my youtube and I’ll check you guys out later. I’m Dane Reid. I’m gone peace

Wanna Hear Some of What I Do? 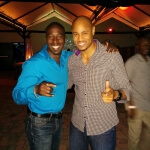