Hip Hop was crushed recently when a giant laid to rest. I remember when DMX introduced himself to the world. The hip hop world was looking for a new set of heroes after the death of Tupac followed by Biggie. Ja Rule was rising. Jay-Z seemed to be the front runner. And Nas was still a serious contender. There were a lot of rappers, especially coming from my hometown of New York, who were all great acts but all seemed to have a hint of the same element. Even Jigga used a similar formula as his late Bed Stuy friend Christopher Wallace. 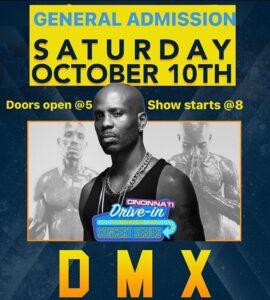 At first, while I was captured by his presence, I thought his style was a gimmick. So many people had tried different rap styles to set themselves apart from the pack, but ultimately failed. In my naivete, I thought that you had to be Jay, Nas or BIG to make it in music. But he was neither. And he wasn’t a gimmick. He told a story but he told it in a different way because he was telling his story and not someone else’s. He was telling Dark Man X’s story.

I didn’t get it at first because I wasn’t living that story. But it caught on with me when he released “And Then there was X”. It was his second album with songs that made me “Lose My Mind Up In Here, Up In Here.” His single “Party Up” was a raw kind of chant that was the perfect song to get rowdy and dance to in the club. I remember throwing my body at other clubbers who threw theirs back at me and we celebrated life and freedom to this song. I was in my 3rd year of college then. Then he came back with “X Gone Give It to You” with more of the same. But the song over the years that really got me being a fan of X’s music was “What These Bitches Want”

I would’ve been canceled in 2021 for admitting that I was a huge fan of his misogynistic collaboration with Sisqo. But I played the song over and over, comparing the list of women that DMX named with those who I had personally had a history with.
” There was Brenda, LaTisha (uh), Linda, Felicia (okay)
Dawn, LeShaun, Ines, and Alicia (ooh)
Theresa, Monica, Sharron, Nicki (uh-huh)
Lisa, Veronica, Karen, Vicky (damn)
Cookies, well I met her in a ice cream parlor (aight?)
Tonya, Dianne, Lori and Carla (okay)
Marina (uh) Selena (uh) Katrina (uh) Sabrina (uh)
About three Kim’s (what?) Latoya, and Tina (woo)
Shelley, Bridget, Cathy, Rasheeda (uh-huh)
Kelly, Nicole, Angel, Juanita (damn)
Stacy, Tracy, Rohna, and Ronda (what?)
Donna, Yolanda (what?) Tawana, and Wanda (what?)”
But my favorite line that X raps about in his experiences dealing with the opposite sex is one so many men relate to. He says ” I think about when a dawg didn’t have. And a dawg told a joke, and the “women” didn’t laugh.” It’s a line that makes me laugh every time.

As the 90’s drew to a close, some rappers emerged to have long term careers and some remained legends but seemingly less active. DMX was one of those legends. He changed hip hop, but I hadn’t heard much about him except for the trouble that he had been in. The headlines of Billboard success were replaced with troubles with the law, drug use and a failed attempt by Iyanla Vanzant to fix his life. So when the pandemic hit and a friend asked me to produce an hip hop radio commercial for the rap icon, I was surprised. I looked him up and saw images of a guy who seemed unrecognizable. He had gained what we often call “Grown Man Weight” was noticeably older than last I had seen him. But while he had changed, his classics remained timeless.

I often ask clients what songs they want to hear in their hip hop radio commercial. But there are some artist that I never ask the client about their songs. Crafting this commercial for DMX was like a walk down Memory Lane. It wasn’t a question of if there were enough hits to put in the ad. It was a question of whether a 60 second commercial would be long enough for all the hit songs that X had made. It of course wasn’t but I think I still captured the essence of what Earl Simmons had created.