At the cross section of one of the most successful voiceover careers and the embodiment of talent, is one of the nicest people in VO, Joe Cipriano. I had a chance to meet Joe Cip (as he is affectionately referred to) a few years at VO Atlanta. He was signing copies of his book “Living on Air” which was co-written by his wife Ann. As soon as he spoke, I recognized that iconic voice. I was intimidated to speak to him. But after purchasing his book, myself and fellow VO friend Scott Chambers sat around talking to him and even sat at his table for the lunch session. He was so COOL. It made me want to know even more about “How Do I Become Like Joe Cipriano?”

Joe’s career is the admiration of most voiceover talent. It spans decades and thousands of very well known promo and radio imaging projects. You’ve heard him as the voice for promos for the Simpsons on Fox and he’s been the voice of comedies on CBS forever. But inspite of his success, Joe is incredibly humble. When I decided that I wanted a chance to interview him, I doubted that he remembered me. But I knew that Scott had kept in touch with him. So I called Scott. And Scott called Joe. And Joe gave the “ok”. This, I knew, was gonna be exciting.

Not every voice actor, podcaster or youtuber visits “The Clubhouse” where Joe cooks up nationally recognized voiceover.  Joe has been the voice of the Emmy’s, Network TV and Game Shows and keeps a busy schedule. So, I was excited to get some of his time for this interview. Much of the prep time at the Clubhouse I spent shooting B Roll of Joe just simply working. His schedule is of back to back jobs. He goes from Game Show, to promos to Radio Imaging with the precision of a surgeon, never missing a beat.

But Joe is still one of the most talented guys in the industry. I had a chance to do a promo read with Joe which blew my mind and inspired the direction of my voiceover career for 2020. Check it out in the video at 9:28. Joe showed me how to break down promo copy. We talked about timing and the nuances of the script which indicate different inflections and points at which the VO talent should change moods, voices etc.  The scripts are complete with info for everyone involved in the project from audio mixers, to the SOT and the video producers. Joe showed me all of that.

Joe changed the way I do business. I watched Joe work for hours and what I was impressed with most was his level of organization.  He was like a machine. Every job he did, he documented in his system and emailed his agent about. Joe explained to me that it was not only 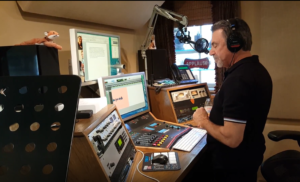 important in keeping track of getting paid, but also making sure you were doing the work you’re being paid for. I know from radio imaging that you are contracted each month to a certain number of pages. Joe keeps track of even the length of scripts and how much he had done that month. After watching him handle the administration part of the job, I went home and became more precise.

Joe credits his success to 4 things: Relationships, Talent, Luck and his wife Ann. Back in 1997 Joe was a radio guy in LA when he was heard on air by a television executive who was searching for the right voice for their new network Fox. He made a few phone calls and a connection of Joes made the introduction. That sparked a relationship with Fox that has lasted more than 2 decades. And similarly, a relationship that he had with a CBS executive that landed him the promo jobs at that network.

But it’s the relationship that he found long before he was nationally admired, with his wife Ann that he seems most proud of. Joe and I talked about his family as much of being a part of his success as he did his talent. Ann helped write his book Living on Air, which they released in 2013. The book explores Joe’s career as well as helps VO talent build their own careers. It takes you through the wild adventures of broadcasting life.

I walked away from the Clubhouse that day thinking about luck. When speaking to most people, they credit hard work exclusively to their success. But during my time with Joe, he was humbled by the fact that there were many key moments when he just got lucky. Obviously, Joe has more talent than most voice actors could hope for. But he very plainly expressed that if it weren’t for simply being given certain opportunities, that he might not be the Joe that we all know. For me, that was humbling.