I used to steal software and plugins for voiceover. I started my career with Cubase LE which came as free software with my Emu 1616 audio interface. As I realized the limitations of that software, I wanted to grow but I didn’t have the money to grow. But having friends in audio engineering, I found out that there were ways to get what was called cracked software.

My first cracked software was a Cubase SX. There was a company that was famous for cracking audio software called      and I used to find their software either online or through a friend who had it. Cubase 2.1 was how I really learned to produce commercials. But a DAW (Digital Audio Workstation) is only as good as the plugins. So for that, I had to find more cracked software.

The hot plugins of the day were waves plugins. Waves were really good and really expensive. Of everyone that I knew who did audio, maybe only one of them actually bought any of the waves plugins legally. Waves plugins could run 10k for a bundle. Being who I am I had to have the best bundles. I had the waves platinum, mercury and gold bundles at some time in history.

As my career grew, I never really considered buying the actual plugins. They were still out of my reach in price. Plus, what was the point? I was getting them for free. Free beats cheap any day. So I perfected my skills with free software and even upgraded as more cracked software replaced the older versions. I went from Cubase SX to Cubase 2.1. Then I moved on to several Nuendo versions for a few years. Meanwhile, voiceover and commercial orders piled on. I had a nice workflow. 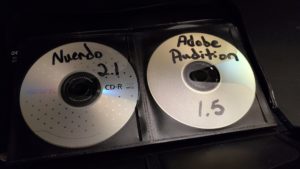 I never shorted on hardware though. I bought my first Neuman for $1500. UA LA 610 for $1400. I owned several computers. A Mac and a PC and a PC laptop. I had travel gear and swapped out several audio interfaces at that time.

The Day It All Went Bad!

So what happened? Well, one morning I got up to do my work. I had several commercials in the pipeline for the day. I fired up my computer and my trusty Emu and then started Nuendo and BAM. Nothing. It wouldn’t start. I tried it again and still nothing. So I restarted the computer hoping that would help. Nothing again. I tried a few times and no result. I was in a bad position.

I called a friend and fellow talent to ask if I could come to his house and record this work and he asked me what had happened. I told him. And his response was something I didn’t expect. He said to me “Why don’t you just buy the software?” I had never thought to actually buy the software. So I did. I bought my first version of Cubase, which was Cubase 5. It cost me $300 at Guitar Center. I came home that morning with my dongle and installed the software and BAM…. Nothing!!

At this point, I’m even more panicked. Installing and getting up and running was much easier with cracked software. So I called Steinberg to help me. I went over several things troubleshooting with the tech before I finally had to admit to the tech that I previously installed unauthorized software. He went silent for a second, and in a judgemental tone said “Well then you have to wipe your entire computer clean and reinstall windows to install Cubase properly.

You can imagine my horror. But I had work to do and the day was coming to a close by now. I got off the phone, backed up as many of my files as I could, and wiped my hard drive. I realized that I had to change at this moment. I did put the plugins back on the computer because I needed them at that moment but over time I began to buy them. I didn’t buy all of them but I bought some.

Pay The Money. It Will Pay You Back!

Over the years I replaced Cubase 5 with Cubase 7 Artist. I also bought Cubase 8 Elements for my mobile rig and then upgraded to Cubase LE AI Elements 9.5. I also bought Cubase Artists 9 for my desktop home studio. That version made all of my 32-bit plugins obsolete so now I had to buy all new plugins. That’s when I bought the Apollo Twin and then the Apollo Arrow with all the plugins for those machines. Now, I can’t steal plugins. I buy them. I also fell in love and buy the Izotope plugins. I have several of those bundles for mixing and mastering. I continue to buy software and plugins for voiceover. For Christmas, I bought UAD’s Manley VoxBox and Valley People Dyna-Mite.

Where To Find Free Software

You don’t even have to steal software and plugins. For plugins, there are literally thousands of free ones online. All you have to do is google free audio plugins. For a DAW everyone knows about Audacity which is free but you can also download a free version of Mixpad which seems better than Audacity.

In my opinion, I get the fact that starting a business or learning a new craft is very expensive, but with free software and plugins for voiceover available now, don’t steal. Don’t steal anything actually. People work hard designing this software and they deserve to make a profit for their efforts. I left some links in the description for Mixpad and Audacity.

If you liked this video blog, please subscribe to either my youtube or this page. Leave comments.

And if you need software and plugins for voiceover or music production, my Rep at Sweetwater is Jason Koons 260-432-8176 ext 1389. Give him a call