When I looked for the right laptop for myself in 2018, I searched far and wide. I know a little bit about tech, so I thought it would be an easy process. I needed something that was portable and could fit inside my small Tumi backpack. I needed something with at least 15 inches in screen real estate with a bright touch screen. And I needed a laptop that could handle audio editing and would be great with the audio interface that I planned on buying (so it had to have Thunderbolt 3). Aside from that, I wanted a laptop that just looked Great. I found all of that and more when I purchased the $2000.00 Dell XPS 15 2 in 1.

It was the perfect machine. I did the research on it. Dave2D (https://www.youtube.com/watch?v=TvXBl063ixk) said it was a “Kick Ass” machine. The Best Buy salesman raved about it. I was impressed that it could handle video renders in 4K and had a 4K screen. This seemed more impressive to me than other options. For me, it was worth spending more money on this machine than any computer I had ever owned. I pondered the decision for months. Should I spend this much on a computer? The answer was “Yes”. It’s for work. Spend the money. On September 1, 2018 I walked into Best Buy and purchased the XPS 9575. That was when the Nightmare on Dell Street began.

Excited I went home, unboxed it and starting using it. But it wasn’t long, minutes, before I noticed that the computer sounded like a jet taking off. It was loud and the fans kept going off. I thought it would stop, but it didn’t. Immediately I also noticed that the trackpad had issues. I did the recommended updates out of the box in hopes that this would resolve the issues. It didn’t. The next day I called Dell support.

Dell support helped me with further updates that kept the machine from making noise but the trackpad issue continued. It wasn’t constant but it was noticeable. I decided fairly early to return it to Best Buy within the 14 day return window and get a replacement unit.

Excited as I was the first time, I unboxed the machine, set it up the way that I like and started using it. It required me to do some out of the box updates which I decided not to do. All was well. I had the machine for 12 days when I took it on a business trip to Seattle and onward to New York. On the plane, the machine began to give problems again with the trackpad. It was the same left side of the computer freezing that the other unit suffered from. I was frustrated and now had a dilemma. I needed to return this machine, but the box and the receipt for it was back in Atlanta. I was stuck with it. From here, I had no choice but to work with Dell to resolve this trackpad issue.

Upon returning to Atlanta I contacted Dell’s Customer Support once again. I told them the issue and they work with me by remotely controlling my machine and troubleshooting it. The agent was confident that after more than an hour, he had resolved the problem. Moments after getting off the call, it was clear that the problem was indeed not solved. After posting on Facebook about the issues, a friend who repairs computers advised me to never buy a (H)Dell. 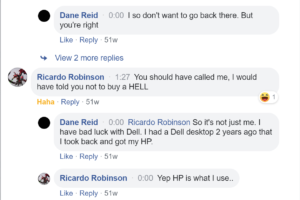 But I was stuck with this computer and it’s problems with the lid closing, which I mentioned in the video and it’s trackpad problem and I was left to the mercy of Dell trying to fix the issue remotely. After speaking with the Dell representative who advised me to send the computer to them to fix, I instead took it to Micro Center, a Dell Authorized repair place.

Micro Center ran test on my Dell for more than a week and was unable to duplicate the problem. But finally, they decided to manually test it and saw the issue. Still their best idea for a fix was to uninstall Dell’s version of Windows 10 and install a factory version. I took my machine home after weeks of not having it, and on the first night, the problem came back. I called Dell and requested the box to send it to them.

I sent my machine to Dell who had it for weeks. They did not know the problem. Finally after pressuring them to figure it out, they sent it back to me with a new backscreen panel and said that that was the problem. It wasn’t long before I figured out that a new screen fixed the ghost touches, but not the trackpad issues. This was unacceptable. Still, Dell reps insisted that the problem was fixed.

More time went by as Dell did more remote take overs of my computer. The process became monotonous as each time the attempted the EXACT SAME things to repair the issue. So I began researching the problem myself and found that on Reddit and even Dells own website that hundreds of people had the same issue. Most notably I found this video which ironically was posted around the time I bought my computer. And the issue wasn’t issolated to the 9575. I began to realize that this was a problem with other Dell Laptops.

The new machine was a joy. It worked great. From there I began using it and editing video and finally audio. From January 2019 until late March, it was fine. Then came the problems again. It started with the same trackpad issues. Then the ghost touches which went haywire. Finally in April, the frequent reboots, blue screens and ultimately, the computer crashed. I had to reload the OS. Everything I had was lost. I searched Dells site for the newest drivers. I tested the machine to be sure that it was functional. But, another few days went by, and the problems with ghost touches and trackpad problems returned.

I started to give up. I posted my issuess about my  Dell on twitter and they responded to me privately, asking me to give them another shot at troubleshooting the issues. This was a waste of more hours, multiple times on the phone and through remote take overs of my computer. The process went on for weeks. I posted more videos of my woes to document Dell’s failures. Finally, I gave up. Dell issued me a “fix” that made the computer less buggy. As long as I no longer had the ghost touches, I could operate the computer using a mouse, which is what I do. That’s hardly what you want to do after buying a $2100 machine that had so much promise.

I seldom use the Dell. I bought the extended warranty in case the ghost touches come back and Dell refuses to honor their committment. But what a shame! My limited time makes it that I can’t fight with them anymore. I was initially enamored with the bright screen and the aluminum back but that all turned into a nighmare. I am presently looking for another computer at a decent price. There are great Windows laptops that will be coming out in 2020 so I will wait until then. But one thing is for sure, “Dude I’m Never Getting A Dell”. And I will advise that my friends don’t either.