I’d heard his voice all the time. Three years ago I got a tip from a local radio jock, Art Terrell, that his station was looking for a new imaging voice and that I should apply. Wow, right here in Atlanta. Sure,

many of the guys I admired in imaging were available for the job but I had the confidence to land the job. That was a Saturday. By Monday I was working on special demo just for the station. But by Wednesday, I tuned into Kiss 104.1 Atlanta and heard the voice of someone else imaging the station. This voice was unfamiliar to me. But although I didn’t know it belonged to personally, I couldn’t help but compliment the choice the station had made. That voice was masterful. That voice was Jaye Delai’s.

Jaye Delai and I shared many people in common circles. We live in the same town but had never crossed paths until Gabrielle Nistico recommend I meet him. Who knew? We had so many familiar bonds in the voiceover business like Mitch Faulkner, Myron Magic Giggua at Radio One, Rick Party, Postman and so many others who worked in this Atlanta market. A quick phone call to Postman and I was hooked up with Jaye. A Houston native, Jaye grew up being an athlete. Sports was his thing. But his father, Rick Roberts was an influential radio personality in the H-town market who challenged his son to branch into the radio business as well. He started as a sports reporter and then an on air personality who went on to do stand up comedy, become the arena announcer of Charlotte Hornets, represent multiple Fortune 500 companies as the product voice and image stations around the country in multiple formats. Jaye is an extremely disciplined talent, who when in his element, is completely in a zone. Jaye knows voiceover. REALLY, Jaye knows voiceover. Aside from having an amazing ear for detail, he has a golden tongue, great set of pipes (as you can hear in this video) and a slick hand for audio production. 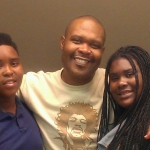 In meeting Jaye Delai it was immediately apparent who he credits his success to. His Dad. He talked about his Dad frequently. Everything Jaye had become was a reflection of the influence his father had on his life and as a father himself, Jaye paid it forward with his own children. I drove up to his home upon our first meeting and I was greeted by Jaye and his son Khalil who Jaye not only raises as his son, but mentors. Jaye was so hands on with Khalil and provided such a great balance of love, education, friendship, and training. Every lesson he could show his son about everything, he did. In subsequent meetings with Jaye, Khalil was with him as Jaye explained everything from sports to voiceover to life in general down to the smallest detail. He participates actively in Khalil’s quest to be a major league player one day all while homeschooling his only boy. While I didn’t have a chance to meet Jaye’s daughter, I imagine his relationship with her was just as loving and involved. And I’d also imagined it was all attributed to the relationship he had with his dad Rick Roberts.

My first conversation with Jaye Delai was a long one. The interview was edited down to a few minutes but our meeting was 4 hours in length. It was tough narrowing down all that we talked about that day to just 12 1/2 minutes. And that’s because we really hit it off. From the day I interviewed Jaye he was welcoming. He has a very professorial/ big brother spirit where he wants to share with whoever he is in contact with. Jaye and I talked about everything from his family to mine, voiceover techniques to religion. That was a year and a half ago. (Jaye probably gave up on me releasing this video since then). Since our first meeting, we’ve been fast friends. Earlier this year when I was hospitalized, Jaye was one of the first voiceover people to offer help and advice. When he was challenged with health issues of his own (as he talked about in the video), so many people in the voiceover community showed up to help him. That’s because Jaye touches so many people with his positive spirit.

When I interviewed Joe Loesch in Nashville, there were two things that really stood out to me. The first being how discipline he was in his voiceover business. And the second was what a big role his faith played in his life. In talking to Jaye at his home, it was the same. He never stopped praising God for bringing him through and to his place in life. He expressed gratitude to the higher power and it fueled his spirit and in turn inspires others. I asked him about the two pictures behind us on the wall which he shared with me in Arabic. We went on to talk about religion for another hour.