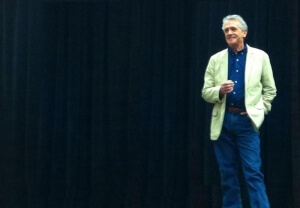 Joe and I spent the entire day together. After his sessions at MTSU, I figured that we would head to his house for the interview. And we did head to his house, but the stay was short. Joe introduced me to beautiful wife Lori who was just as kind and talented as an artist, as he is as a voiceover guy. From there, we headed out to dinner where I learned so much about Joe, his family, his faith and his passion for the Road Crew, his band of buddies who have travelled the Route 66 roadway for many years entertaining crowds.

From there, we headed back to the house, where Joe showed off his major league recording studio, his awards and his record selling audio childrens books series. Over the years, Joe has written, published and narrated his own series of books covering Route 66, Bible stories and American history stories. While Joe produces and narrates the audioboks himself, he also employs other professional voice actors as characters.

To understand what makes Joe the complete package in voiceover, you have to know his history. He started out very young as a ventriloquist where he developed his skills as an unabashed performer. He moved into advertising where he got a few big breaks and was pulled into projects as a character actor. He has become a skilled videographer, audio engineer, voice over coach who has worked with celebrities like Reese Witherspoon on accent reduction. Joe has developed his skills over time by employing several methods which I derived from interviewing him. 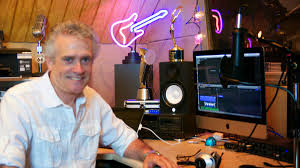 Joe and his wife both work from home but they are both highly disciplined workers. Joe keeps a focused schedule on how he runs his day. He and his wife start their day off with prayer and coffee every morning and then they separate and go to the respective offices; one upstairs and the other downstairs. Joe does research everyday to find voiceover work as well as auditions, contacts clients and students he coaches, and develops new ideas for his books and other projects. He also keeps an active yet non-controversial social media profile. Most of his post are about voiceover.

Joe Loesch has been an example to me in my voiceover career with his professionalism and positive attitude. I have developed the habit of waking up early in every morning, going to the gym, coming home, showering, dressing up for work and getting to my voiceover office space everyday at the same time. I develop a to do list every week which I execute a portion of every day. I’m hoping to be like Joe Loesch one day, but something tells me he’s not going to slow down so I can catch up.