Scammers are everywhere. In every business and in everyday life. Each day someone is trying to steal your personal information or cheat you in some way and each time you have to be a step ahead of them. There are the ones who call you telling you that “A” computer in your home is infected and they can clean it for you. This past week I received a call saying that the warranty was up on my car. And while I field many calls of these types and embarrass the callers with questions that they can’t possibly answer (and making it obvious to them that I know its a fraud), some scams, like voiceover scams are a bit trickier than others. 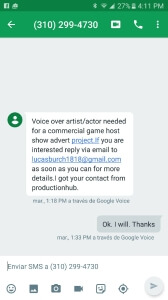 Whenever someone knows your name and a bit about what you do for a living then it gets harder to spot. While I was almost amused by the warranty attempt this week, I was a bit more challenged by a professional scam in the same week. I received a text message from someone who said they found my info on a site called Production Hub. I haven’t logged onto that site in a while so to see someone with an interest in my work there was interesting to say the least. But it was welcome. The message asked me to email them if interested. Nothing about that seemed too odd, so I did. Everything was normal.
The next morning I received an email from the prospective client which was very detailed and professional. He outlined what he needed, leaving me with few questions. Admittedly I was tied up with other projects when I got the email so I didn’t read through it thoroughly the first time. But later when I did, I noticed that the name of the company that he claimed to represent was one that I had heard of. It was the Welteroth Agency. But the first thing that I thought of was “Why would someone from a agency like that initiate a conversation with me via text?” “Perhaps my info was hard to find” I thought to myself. But then my second question was “Why didn’t they use the company email and instead use “lucasburch1818@gmail.com.” So I googled the email address and found nothing. Interested in making a few dollars for 90 minutes of work, I shrugged it off from there. 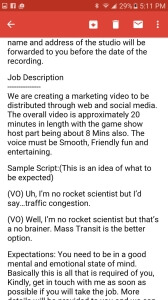 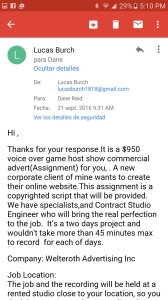 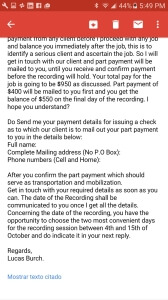 This was the first email. So I responded by suggesting two studios here in Atlanta that might be good to work with. But this “Lucas Burch” responded again with an email that I noticed simply said “Hi” to start with without saying “Hi Dane” which would be less generic. The second set of emails said this. 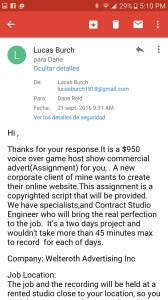 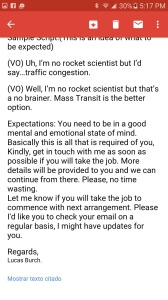 At this point the biggest Red Flag went off. Lucas asked for my address and insisted that I didn’t use a P.O. Box. Every company that I have ever done business with has sent checks to my P.O. Box. The fact that this company didn’t want to was too odd. Even if that were standard, for safety reasons, I would’ve insisted the check be sent to my P.O. Box.
I’ve seen a similar scam before when I tried to sell my furniture last year. It’s an overpayment scam and here’s how it works.
The scammers send you a check that is for more than they promised you. Then they instruct you that the rest of the money, after you cash it against your account, is to pay the studio (or the movers in my furniture case).  Someone comes from the “Studio” to get the balance owed to them or you have to wire them the cash before the “session”. The session never happens but you just cashed a bad check against your account which you are now responsible for. As I was doing some research for this blog, I noticed that Doug Turkel wrote a blog about this same scam on his blog and that other talents had experienced the same. His article is detailed with more info on the scam as the voiceover talent went further and asked lots of questions as the scammer tried to gain the upper hand on the talent.
In my case I sent an email response to Lucas informing him that all checks should be written in the name of my company and that the company address was the P.O. Box. If he did not feel comfortable with that then we would be better doing business through my agent Jeffrey Umberger. From there I didn’t receive any responses. So I called Human Resources at the Welteroth Agency. When the person called me back, she confirmed that anyone representing their agancy would in fact use a company email. She thanked me for reporting it and said that this has been happening a lot.
I 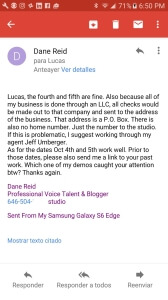 noticed that the scammer emailed me both times in the morning. Following my response, there was no email back the next morning at that same time and hasn’t been one since. If anyone contacts you and it seems very generic or some of the other signs tip you off, do the research to confirm whether the job is legitimate or not. Another great article to check out is one by Dave Couroisier (which I became aware of after reading Doug’s blog) called 5 Ways to Protect Yourself From VO Scammers
Much like on public transportation, if you see something say something. This is my second encounter this year. The first one earlier this year was by a fellow voice talent and imaging producer who took money from me to produce a demo and then never contacted me again. I will blog about that in the future after I confront him in person. He must’ve not know how much I enjoy flying. I will out him soon enough. See you in California buddy. I know where you live and work.

Song In Video By The Croft by Joakim Karud https://soundcloud.com/joakimkarudMusic provided by Audio Library https://youtu.be/tnV_PH26SVU